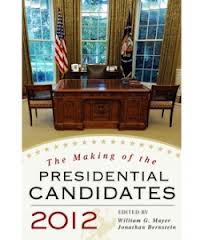 Stephen J. Farnsworth, professor of political science and director of the university’s Center for Leadership and Media Studies, is co-author of a chapter entitled, “How Television Covers the Presidential Nomination Process,” in The Making of the Presidential Candidates 2012, an edited volume published by Rowman & Littlefield.

Farnsworth, an expert on media and politics, will rejoin the faculty of UMW in January to open the Center for Leadership and Media Studies on the Fredericksburg campus and to teach in the Department of Political Science and International Affairs. He taught at UMW for 13 years until 2008 and has researched elections, the mass media, the presidency and public opinion in the United States. Farnsworth is currently associate professor of communications at George Mason University.

He is the author of “Spinner in chief: How Presidents Sell Their Policies and Themselves” and “Political Support in a Frustrated America.” He also co-authored “The Nightly News Nightmare: Television’s Coverage of U.S. Presidential Elections, 1988-2004” and “The Mediated Presidency: Television News and Presidential Governance.”

Karl Rove is the Republican political strategist best known as President George W. Bush’s top advisor. He served as Bush’s senior advisor from 2000 to 2007 and as deputy chief of staff from 2004 to 2007. He oversaw the White House offices of strategic initiatives, political affairs, public liaison and intergovernmental affairs and was deputy chief of staff for policy, coordinating the White House policy-making process.

Rove is now a Fox News contributor, writes a weekly op-ed column for the Wall Street Journal and serves as a Newsweek columnist. He wrote the newly released New York Times bestseller “Courage and Consequence: My Life as a Conservative in the Fight.”

Prior to serving as the architect of George W. Bush’s 2000 and 2004 presidential campaigns, Rove was president of Karl Rove + Company, an Austin, Texas-based public affairs firm that worked for Republican candidates, nonpartisan causes and nonprofit groups. His clients included more than 75 Republican U.S. Senate, congressional and gubernatorial candidates in 24 states, as well as the Moderate Party of Sweden.

At UT-Austin, Rove has taught graduate students at the Lyndon B. Johnson School of Public Affairs and undergraduates in the journalism and government departments. He has served on the Board of International Broadcasting, which oversaw the operations of Radio Free Europe and Radio Liberty, and on the White House Fellows regional selection panel. He also was a member of the boards of regents at Texas Woman’s University and at East Texas State University.

For more information, contact the Office of University Events and Conferencing at (540) 654-1065.