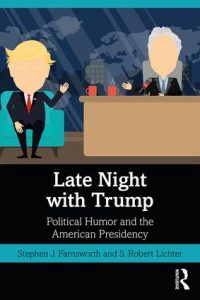 Stephen Farnsworth, professor of political science and director of the University’s Center for Leadership and Media Studies, is co-author of a new book, Late Night with Trump: Political Humor and the American Presidency, published this week by Routledge Press, an academic publisher. The book was funded by Dr. Farnsworth's Waple Fellowship .

From the publisher: "Political humor has been a staple of late-night television for decades. The Trump White House, however, has received significantly greater attention than that of past presidents, such as Barack Obama, George W. Bush, and even Bill Clinton. In response to Trump’s strident politics, late-night comics, including Stephen Colbert, Jimmy Kimmel, Trevor Noah and Jimmy Fallon, have sounded key policy notes, further blurring the boundary between news and satire. Weekly humorists, including John Oliver and Samantha Bee, extend the critique with in-depth probing of key issues, while Saturday Night Live continues to tap the progression from outrage to outrageousness.”

“Using unique content analysis techniques and qualitative discussions of political humor, Farnsworth and Lichter show how late-night political humor, and these seven programs in particular, have responded to the Trump presidency. Employing a dataset of more than 100,000 late night jokes going back decades, these noted media scholars discuss how the treatment of Trump differs from previous presidents, and how the Trump era is likely to shape the future of political humor. The authors also employ public opinion survey data to consider the growing role these late-night programs play in framing public opinion and priorities. This book will interest scholars, the curious public, and students of politics, communications and the media, and contemporary American culture.”