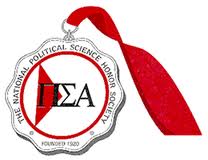 Stephen Farnsworth, professor of political science and director of the UMW Center for Leadership and Media Studies, was recognized for his dedication and service to Pi Sigma Alpha, the national political science honor society, at the American Political Science Association Conference earlier this month.

“Steve has long been a champion of Pi Sigma Alpha, and for 20 years has supported its mission of recognizing student excellence in political science,” said Sean Twombly, executive director of Pi Sigma Alpha. “As president, Steve helped shape new programming that emphasizes the importance of student research and its place in the undergraduate curriculum. The impact of this work will be felt for a long time.”