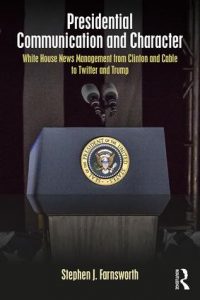 Professor of Political Science Stephen Farnsworth spoke to appeared on a segment titled "Pelosi Visits Taiwan Despite Warnings" on CTV News Canada. “There’s no time like the present to stand up for democracy,” Farnsworth said. “I think the fundamental challenge the United States faces in the wake of the Donald Trump years is to demonstrate a commitment to the principles that we have.” Hear more

Farnsworth also spoke to the Australian Broadcasting Corp. for a story titled “Kansas Put Abortion Rights on the Ballot. The Surprising Outcome is Reverberating Across the United States.” Farnsworth said: “What you see here, though, is that the Republican Party has put itself in a very difficult spot on the abortion question. It is much better to be a Republican running against abortion when abortion is legal than to be asking voters how to react once abortion is under the kind of threat that it’s under right now.” Read more.