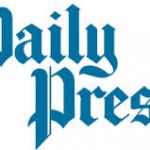 “Most voters are either Democrats or Republicans and will vote for their party's candidates, regardless of who is footing the tab,” he said.

[...] Fellow Democrats called for Northam to resign. Now many are taking his money. (Daily Press)