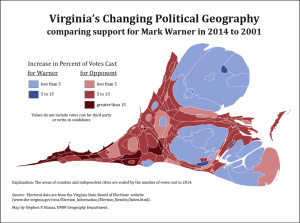 Stephen Hanna of the University of Mary Washington created a map as part of a research project by Stephen Farnsworth, Stephen Hanna and Benjamin Hermerding. It contrasts the shift in the vote for Mark Warner between 2001, when he became governor, with his vote in 2014. The swollen blue areas were more likely to vote for Warner over the span of 13 years — but also overlap with the areas where turnout dipped the most…..

As Farnsworth, Hanna, and Hemmerding put it: “The sea of rural blue that Warner enjoyed in 2001 has been replaced by deep red Republican sentiments. Rural voters who once backed him are now far less likely to split their tickets.”